Nail-biter, procrastinator, potty-mouth or chocaholic. If you class yourself within one of these categories, you’re not alone. These are just a few of Britain’s top bad habits as found in a study by ColdZyme Mouth Spray, which also revealed that more than 90% of people admit to having at least one bad habit.

But, have you ever considered the etiquette of wearing shoes?

Here at Wynsors, we decided to find out how seriously people take shoe etiquette by conducting a series of polls on Twitter asking questions ranging from “is it ever acceptable to wear flip-flops to work?” to “do you allow shoes to be worn in your house?”.

Keep reading to find out the answers!

Should you wear shoes in the house?

It may not be on the same level as the eternal scone-pronunciation debate (seriously, is it “sc – oh-n” or “sc-on”?), but whether shoes should be worn inside is widely disputed between households across the world.

Whether you cringe at the thought of asking people to take their shoes off, or you have a pair of mandatory slippers in hand ready to claim your next shoe-wearing criminal, we posed the question on Twitter to find out the preferred house rules.

Our poll showed that 37% live by a ‘no rules needed’ approach and see no problem with keeping shoes on around the crib (which totally makes sense if your prone to stubbing your toe), with the remaining 22% of people sitting on the shoe-wearing fence and only allowing guests to.

However, a whopping 41% of respondents told us that they don’t allow shoes to be worn at all – and we don’t blame them. A study, conducted by Dr. Charles Gerba at the University of Arizona, found large numbers of bacteria both on the bottom and inside of shoes, averaging at 421,000 units of bacteria on the outside of the shoe and 2,887 on the inside.

Seems like a great excuse to buy a new pair of slippers if you ask us! Our collection of slippers for men, women, boys and girls ticks all the right boxes.

The British love to be barefoot!

So, if it’s not the best idea to wear shoes inside, what should you wear?

We asked people to share their favourite things to wear around the house, and the results are in… nothing at all! It turns out that a third of our answerers think barefoot is the best when relaxing at home.

Sound a bit too chilly for your liking? You’ll be glad to know that 27% love slipping into some heavenly slippers, followed by 25% who prefer to sport some no-fuss, ordinary socks.

From TV dinner to restaurant-worthy winner

Most of us have fallen at the first hurdle at some point trying to get into a bar or club while wearing your favourite pair of sneaks – a surprising one-in-five of us to be exact – so where do we stand with restaurants?

We pitched the question “would you ever wear trainers to a restaurant” to the people of Twitter, and found that over half would consider wearing trainers out for a meal, but only depending on the place. It seems as though the majority of people are on the trainer hype too, with a third saying they would rock up in their favourite creps without a doubt.

How to style trainers for different occasions

Whether you’re taking a trip down to your local ‘Spoons, or you’re heading into town for a classy night with your pals, it’s important to know your outfit options.

The Michelin-star restaurant – if you’re lucky enough take a trip to a fancy eatery, we’d recommend ditching the trainers for a more formal pair of shoes (bearing in mind the restaurant’s dress code). This doesn’t completely rule them out though; a clean, black pair teamed with a suit jacket will keep things looking smart.

From sunning yourself on the beach to rescuing your feet after a long night of partying, flip-flops are considered by many as the footwear choice of champions.

But is it ever acceptable to wear flip-flops to work?

Despite workplace dress codes becoming slightly more lenient in modern times, a third of those who took part think that flip-flops should never (under any circumstances) be worn to the office. Previous research we’ve undertaken also found that 40% of people surveyed feel it’s NEVER acceptable to wear trainers to work – let alone flip-flops!

If you’re a flip-flop fan, don’t worry; we did discover that 18% have no issue with people wearing these flexible flops, with 40% agreeing they’re acceptable – but only in hot weather.

Have you got any shoe-related habits you’d like to share? Let us know on Facebook! In the meantime, browse stylish shoes for men, women and kids right here at Wynsors. 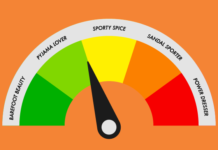 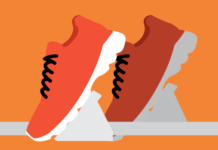 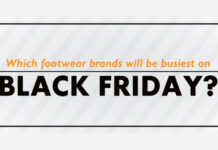